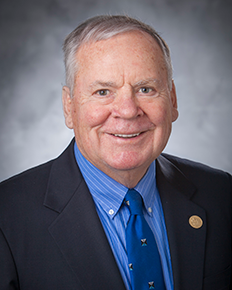 James Randolph Urbaniak, MD, was born in Fairmont, West Virginia in 1936. Attending the University of Kentucky, he graduated magna cum laude and Phi Beta Kappa while also playing football for legendary coach Bear Bryant. He matriculated to the Duke University School of Medicine in 1958 and remained here for his internship before being drafted into the United States Navy. He served two years as the Attending Physician of the United States Congress and Supreme Court before returning to Durham to complete his residency in orthopaedic surgery in 1969. Quickly recognized for his extraordinary potential as a clinician, researcher, and educator, Urbaniak was recruited to stay on the faculty where he rapidly ascended the academic ranks, building a busy clinical practice while maintaining ongoing support from the National Institutes of Health for his investigations. He served as Chief of Orthopaedic Surgery at Duke for 17 years, rising to the rank of Professor of Surgery.

A renaissance surgeon–scientist, Urbaniak established his professional reputation in three domains. For 30 years, he directed hand surgery at Duke, creating an international reputation for the program. Building off that success, he inaugurated one of the earliest replantation programs in the country, performing the first such operation here at Duke in 1974 and eventually re-attaching more than 1,200 amputated body parts. Marshaling the microsurgery skills mastered in hand surgery and replantation, Urbaniak combined basic and clinical research efforts to develop free vascularized fibular grafts to treat the previously intractable challenge of avascular necrosis in the femoral head. Performing over 3,000 free vascularized fibular grafts personally, he witnessed patients around the world benefit from the procedure he invented.

Over the course of an extraordinarily successful career, Urbaniak shaped the field of orthopaedic surgery through the 300 peer-reviewed articles and 13 books he published. He has presided over the American Orthopaedic Association, the American Board of Orthopaedic Surgeons, the International Federation of Societies for Surgery of the Hand, and every other notable professional organization in his field. It is a testament to the character of the man that of his dozens of prestigious prizes, including the Sheen Award from the American College of Surgeons and the Kappa Delta Award from the American Academy of Orthopaedic Surgeons, Urbaniak is most proud of being the only two-time recipient of the Duke Orthopaedic Residents and Fellows Teaching Award. This accomplishment, and his delight in it, epitomizes his commitment to the hundreds of residents and fellows he trained and inspired over the course of his career.

To these trainees, he imparted the seminal lesson: it’s not how much you know, it’s how much you care. Always leading by example, Urbaniak embodied this axiom throughout his life. Generous with his time, dedicated to his patients, selflessly humble in his interactions with others, and ever loyal to Duke, he led not by force but via the respect and admiration he enkindled in all those around him.

By virtue of his exceptional contributions to Duke Surgery and the field of orthopaedic surgery, Dr. James R. Urbaniak is recognized as a true Master Surgeon. This honor is bestowed to establish a living memory of an individual who has exemplified the ideals of Duke Surgery, with the expectation that reflection on this illustrious career will serve as a guidepost for those aspiring to a life in the art and science of surgery.