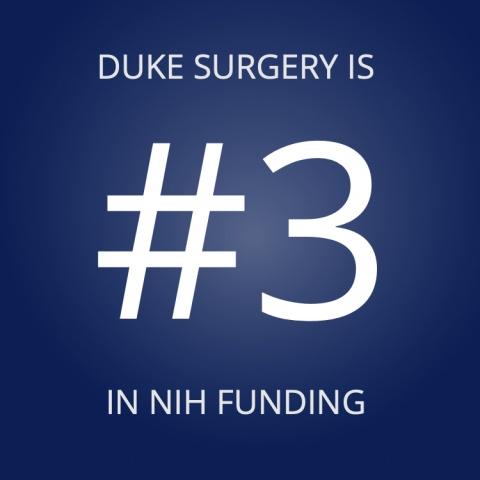 The Duke Department of Surgery now ranks third among surgery departments nationwide in National Institutes of Health (NIH) funding received in 2019 according to the newly released Blue Ridge rankings. Duke Surgery has continued to rank in the top five nationally over the past 30 years, demonstrating the department’s long-standing commitment to investigate the impact of disease on patient health. With a diverse portfolio, including 78.7% of funding from the NIH, Duke Surgery faculty and staff perform a wide variety of research to improve the human condition.

“Once again, we are proud to announce that Duke is one of the top five surgical departments in NIH funding, ranking #3 for 2019 with $43,528,737 awarded to Duke Surgery researchers, as well as $11,780,967 in industry, foundation, and other federal awards. Congratulations to our surgeon–scientists!”